A common question asked by researchers, and members of the public, is “how long are people expected to survive beyond their diagnosis of cancer?” For several reasons, this can be a very tricky question to answer. To answer this question we could start by looking at the current population of people with cancer and record how long they have been alive since their diagnosis. We could then take an average over all of these people and come up with a probability for a certain time period; for example, an interpretation of this calculation could be “70% of people with cancer were alive at 5 years after their diagnosis”. However, there are a number of factors which we have not taken into account, which can bias our estimate of “70%”. One of these factors could be whether or not the patient died of their cancer or from other causes (also known as competing risks). So, how can we obtain an estimate of survival that is unbiased?

There are many measures of survival in both randomised controlled trials and observational studies. Here, I focus on one measure of survival that is most commonly used for cancer survival estimates in population (observational) studies: this estimate is called Net Survival.

Before we go any further, it is beneficial to give some clear definitions. Survival is the percentage of the population alive at a certain time, given that these people have survived up to that time. Net survival is the estimated survival of patients, where this estimate accounts for the competing risks of death. In other words, and in this context, it is the survival of cancer patients that would be observed if their cancer were the only possible cause of death. Survival is commonly mistaken as a rate; this is because the estimate for a survival probability is derived from an estimate of the hazard, which is a rate. I do not go into the specifics here, but it is only correct to use the term survival as a probability statement and not a rate.

To estimate net survival, we first decompose the observed hazard (i.e. the hazard across all patients in our dataset) into the population hazard (i.e. assumed to be the hazard due to other causes) and the excess hazard, that is: 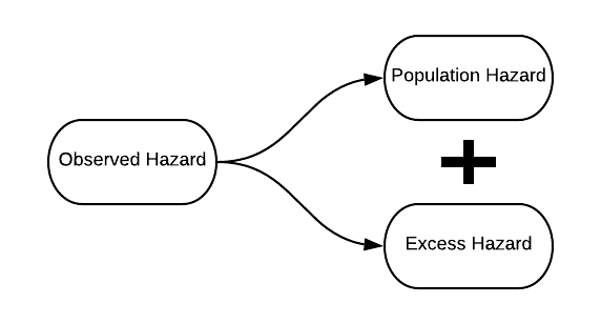 Here we are making some very important assumptions. We first assume that the time to death due to the cancer and the time to death due to other causes are conditionally independent given a set of known covariates (i.e. the patient’s age at diagnosis, gender, deprivation, and calendar year at time of diagnosis). It is by this very assumption that cancer survival estimates from one country can be compared to survival estimates from another country, because accounting for the background population mortality for a country makes the survival estimate for that country independent of the background population mortality.

Estimating the excess hazard requires allocating each cancer patient with an expected mortality rate from population life tables. Life tables are usually stratified by at least age and gender because the mortality rate can differ greatly between the young and older, or male and female, patients. Another demographic variable considered for stratification is socioeconomic status; however, much like ethnicity or comorbidity status, the records for these variables are not always available. The inclusion of additional demographic variables has been shown to improve the estimate of net survival and should be included where possible.

At this point, we could be thinking, why don’t we just estimate the overall survival of all cancer patients in our dataset because, since they are from the same country, they would be exposed to the same risks or have roughly the same mortality rate? The reasons why we don’t is because we wish to compare cancer survival estimates between countries, and each country has its own mortality rate: this is where net survival becomes particularly useful.

(Constantly updated, the author is lethargic…)