When you cut your finger or grazed your elbow, healthy cells signal to each other to grow and divide. When there is no more space for the healthy cells to fill, the cells signal to each other to stop dividing. Signals are passed between cells by molecules on the surface (membrane) of the cell. The signals help the cell to stay in the right place; any cells that do not recognise their neighbouring cell’s molecules undergo apoptosis (programmed cell death).

Bodily cells function normally until there is a mutation of the DNA (deoxyribonucleic acid) of a gene within the nucleus that instructs the cell to cease or alter its normal function. One of the functions of a gene is to regulate how often and how much the cell divides. If this function ceases or is altered, then the cell may continue to divide at an unstoppable rate. Cancer results from an uncontrolled proliferation of cells in your body, and may lead to a tumour, which is a mass of misfunctioning cells. The tumour may then spread if cancerous cells metastasise from the mass.

How is cancer treated?

For hundreds of years, ever since the ancient Egyptians, physicians have been confounded by the origins of cancer and how to rid it of the body. William Halsted, a radical 19th century surgeon, pioneered extensive removal of bodily tissue to not only detach the original tumour but also avoid cancer cells reaching further into the body. Later, in 1896, Emil Grubbe used radiation to kill cancerous cells, but this also killed healthy cells. Radiation is still used as a treatment because cancer cells do not have the ability to repair, but healthy cells do. Fast-forward into the 1940s, during the outbreak of World War Two, one of the first chemotherapy drugs, nitrogen mustard, was used to treat lymphoma. This too has side effects, chemotherapy drugs target rapidly dividing cells, such as cancer, but the body also has rapidly dividing healthy cells such as the skin and hair. Chemotherapy is cytotoxic: the drug kills cancer cells. In 1975, Cesar Milstein and Georges Kohler discovered the process to make antibodies. Antibodies are naturally occurring proteins within the immune system that bind to antigens and tag a foreign cell for attack by other parts of the immune system. This “tagging” process gave the success to targeted therapies, such as immunotherapy.

What are the types of immunotherapy?

Adoptive cell transfer (ACT) therapy works by transferring cells into a patient, the cells may have come from the same patient or another individual. Currently, there are three types of ACT. The first is chimeric antigen receptor T-cell (CAR-T) therapy, which works by extracting T-cells from your blood, reprogramming the T-cells to attack cancer cells, and then infusing the cells back into your blood stream. The second is T-cell receptor (TCR) therapy, which works in a similar way to CAR-T except TCRs tell T-cells to look for specific antigens inside the cancer cells. The third is tumour-infiltrating lymphocytes (TIL); unlike CAR-T or TCR, this therapy does not involve reprogramming T-cells in a laboratory, instead the lymphocytes within your immune system have infiltrated the cancer cells and are fighting the cancer on its own. CAR-T therapy is used to treat relapsing non-Hodgkin lymphoma subtypes; TCR has not been approved but has shown promise for synovial sarcoma and metastatic myeloma; and TIL is being trialled in colorectal, kidney, ovarian, and skin cancers.

Monoclonal antibodies (MA) work by ‘flagging’ proteins (antigens) in your body as foreign objects. It then engages your immune system to seek out and destroy cells containing that antigen. Currently there are three types of MA. The first is Naked MA, the most common type, which instructs the immune system to block proteins within tumours that help the cancer to grow. The second is Conjugated MA, which are combined with a chemotherapy drug and provide a specific target for the chemotherapy to attack. The third is Bispecific MA, which, as the name suggests, is designed to bind to two antigens – one on the cancer cell and the other on an immune system cell – causing the immune system to locate and destroy cancer cells.

Immune Checkpoint Inhibitors (ICI) are one of the more successful therapies in terms of numbers; they work by turning off the brakes of the immune cells. Immune cells, which naturally fight off bacteria and viruses, have molecular brakes called a checkpoint so that they do not attack health cells. Cancer cells signal to the immune cells to switch on that brake (effectively hiding from the immune cells), and the immune cell does not destroy the cancer cell. ICI drugs release that brake by interfering with the signal between immune and cancer cells, allowing the immune cell to switch off its brake and to kill the cancer. Currently, there are two types of ICI therapies. The first is programmed death 1 (PD-1), or programmed death-ligand 1 (PD-L1), inhibitors. These inhibitors target checkpoints called PD-1 or PD-L1 antigens found on the membrane of T-cells. The second is cytotoxic T-lymphocyte protein-4 (CTLA-4), which targets the CTLA-4 antigen checkpoint on the membrane of T-cells.

Cancer vaccines work in a similar way to most well-known vaccines for infectious diseases caused by a virus. Cancer vaccines are made from dead cancer cells or pieces of protein from cancer cells that are injected into your immune system. The immune system binds with the foreign antigens and then T-cells replicate to fight the cancer. There is currently a cancer vaccine to treat advanced prostate cancer.

Are there any side effects?

With any treatment there are always side effects. In epidemiological research these side effects are monitored, recorded and given the term ‘adverse events’.

The graph below shows the number of possible adverse events that could be experienced by patients on each immunotherapy. This is raw data that should only be interpreted with the most critical of views. 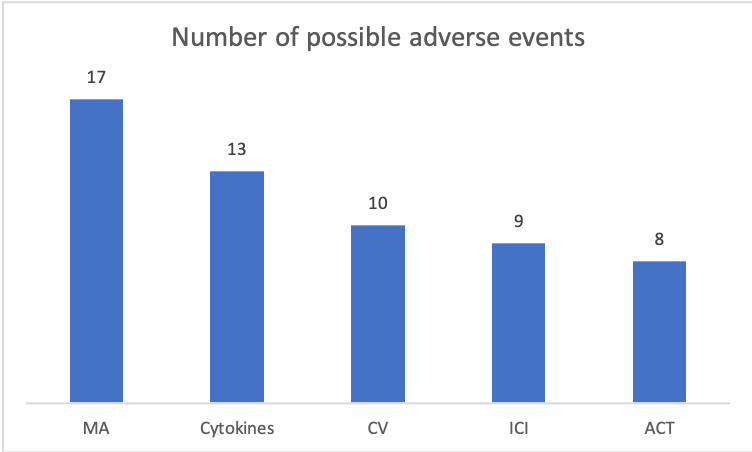 How will the treatment impact the patient’s quality of life?

Measures of quality of life…